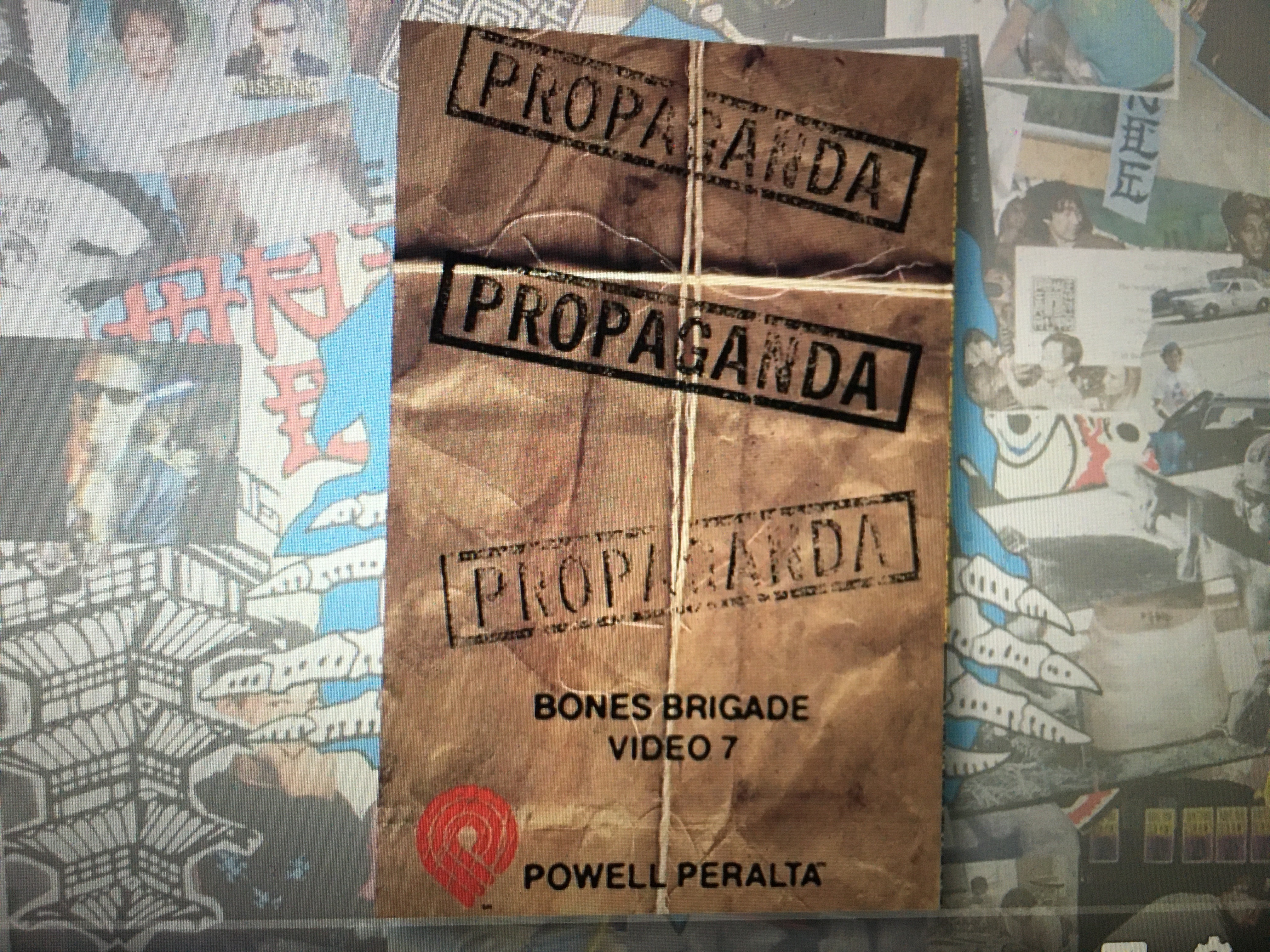 Frankie Hill posted a picture of the Powell Peralta video (VHS) “Propaganda” yesterday, saying it was the 30 year anniversary.  It reminded me that I wanted to tell the story of the Propaganda video premiere at the Powell Warehouse (aka Skatezone) that was apparently in 1990!  Time flies.

I recently hit up Jim Fitzpatrick trying to figure out what contest happened that day.  He actually didn’t remember there being a contest, so now I’m questioning my own memory.  Sometimes when you do the same thing over and over, the days can get jumbled. I went to The Skatezone all the time, and to many of the contests that were held there. So MAYBE I’m mixing things up. BUT, the way I remember it….

The contest was over in the late afternoon/early evening.  I’m pretty sure they kicked everyone out of the Skatezone for a couple/few hours to get set up for the premiere.  I have this vague recollection of them (the Powell employees) giving everyone bags with some Schwag and YOUR tickets to the show.  You see, they actually had a small makeshift theater in what was usually the editing room.  I want to say it seated about 30?  Everyone got tickets to certain showings.  So your ticket might be a showing at 7:30 while one of your friends got the 10:00 showing.  They had multiple showings.  It was the only time I’ve ever seen a premiere like that.  It was dope.

At some point they opened the doors back up, and for the first time, the gigantic spine-mini-ramp was completely finished.  They finished building the bowl section that day, so it was the first time anyone got the skate it complete.  It was insane.  Every pro you could imagine was there, and most of them were on the ramp. Certain teams took up certain sections.  I can remember the Plan-B team was in the corner closest to the front door skating a 12 or 16 foot wide section that was 6 feet tall.  I think it was Pat Duffy, Carroll, and maybe Sheffey and some others.

The session was a full-on snake/texas death match type vibe.  Other times it was more like teams skating their certain sections. Usually there were about 4 or 5 people skating at the same time.  The only time there was one person skating, was when Tony Hawk dropped in.  Don’t get me wrong, everyone was ripping, but it was just a different thing when Tony dropped in.  He was doing 540’s over the spine for Pete’s Sake!!  (actually, now that I think about it, pretty sure he was doing 720’s over the spine too) It was crazy to watch.  He was honestly light years ahead of everyone.

So not only do you have this crazy session going on the ramp, but, there’s all kinds of skaters, industry heads, pros, kids, etc., cruising around the skate park and outside.  Then you walk over to this door on the other side of the ramp, and through that, is the party.  They had all kinds of kegs.  Good beer. I remember Sierra Nevada and Guinness. Catered food.  There were cheese and meat platters, veggies…  I kinda think maybe they had full sandwiches and a chocolate fountain? Probably some other stuff as well. The servers were dressed up in black and white with ties on (you gotta remember, we were just dirty skate rats, this shit was mind blowing) and there was also a miniature golf course set up! George Powell was in there entertaining people.  It was a pretty classy vibe contrasted with the dirty, sweaty skaters.  So awesome.

Off to the side of the party was the entrance to the editing room/makeshift theatre.  I don’t remember what time my showing was, but I do remember Steve Caballero was at that one.  I kinda think maybe they separated the Powell pro’s so that when you went to your allotted time, no matter which showing it was, there would be a pro there.  Not sure if that was planned, but it made the experience that much better.

That premiere was one for the books.  Maybe the best skate video premiere I’ve ever been too (and that really is saying something because I’ve been to some amazing premieres).  Thanks to all the people that had a hand in that and especially to George Powell for giving us kids such an amazing place to skate and to rub elbows with the best in the world in 1990.

POST SCRIPT: I was just texting with Santarossa and he said the contest was the Quarter Master Cup Finals, an amateur shop series.  He also said this was the night he got sponsored by Dogtown and Venture (Mike won his age group earlier), and that Chris Senn got sponsored by Powell and Venture too.  Here’s the text Mike sent me;

“I met Chris that day skating a quarter pipe during practice, I saw him skate later and told Todd Hastings he should hook him up.. he said he was already on it. Keith Cochran was a judge and put us both on venture that day.. Mikey Taylor (OG) was on some sorta flow from Dog Town and was trying to help get me hooked up on the same flow program, he said the guy was there that night and so when he took me to him it was Keith who I already met and he was like no I wanna put you on both DTS and Venture.”